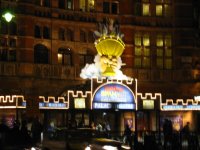 We bought tickets to see Spamalot our last day in London.

We sat in the 2nd row and had a great view of the cast including Tim Curry playing the lead role of King Aurther. He played the same part in the Broadway version that won the Tony award for 2005.

Chris had the soundtrack and knew most of the numbers. I was a virgin and laughed the entire time. It is pretty funny.
Posted by Jeff & Chris at 1:04 PM

oh -my gosh - I bet that was hysterical