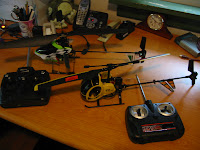 I took the picture but Chris wrote the following...

The UPS driver pulls up to the house in between rain showers…..

10:15 UPS arrives with box
10:16 Jeff rips open box to find the second helicopter he got for his birthday
10:20 Jeff is finished putting it together and he and Hal head outside to test
10:25 helicopter meets gravity – gravity wins
10:26 Jeff starts the salvage mission
10:45 Jeff spends 10 minutes looking for super glue

Flash back about a week ago…….

10:15 Jeff opens the box of the first helicopter (yellow) he got for his birthday
10:16 Jeff is finished putting it together and he and Hal……Long pause as several days go by with lots of rain…..

A few days later
10:20 Jeff and Hall head out for a test run
10:25 helicopter meets rose bush – rose bush wins
10:26 Jeff starts the salvage mission
10:45 Jeff is on the internet ordering spare parts
------------------
In my defense the first helicopter only broke a small plastic bar that helps hold one side of the canopy on. It did make it a bit unbalanced but it still flew. The replacement part was $2 and it shipped right away.
I got the 2nd helicopter because it is a 4 channel instead of a 2 channel and has more control of flight. It was also a HUGE deal...$250 retail and I got it for $85. I broke one of the runners where it attaches to the leg which I just superglued back together.
Lessons learned....
4 channel is better than 2 channel for trying to fly.
Don't practice on the driveway it is too hard of a surface and there are too many rose bushes. Practice indoors in a smooth floor in a smaller space so you don't go wandering too much. Oh, and practice practice practice...it takes time to learn how to fly these darn things.
Posted by Jeff & Chris at 10:20 AM

Y'know... I can fix about just about anything you can break. Especially if it's plastic.
I've got a killer set of tools. And lots of plastic.
Stop buying parts, for gods' sake!

I think the real lesson learned is that Jeff likes to crash things, as quickly as possible, the more expensive, the better.

Helping him by repairing his broken st00f is simply enabling behaviour! (Grin)

By the way, did we mention that Jeff cannot practice it in the house because Hal believes it is a cat toy. I have to hold him when Jeff starts it up (but I really want to know what would happen if I let him down. :)

I believe in that situation the helicopter would win.