Tombstone Workshop was a big hit!

It was a long day Saturday but everyone had a great time. Our morning session started at 9am but people arrived as instructed a little earlier. We had 12 people show up and carve out their own custom epitaphs. Everyone got right to work taping their epitaphs together and gluing them to their tombstone blanks. It took a while for people to get their tombstones carved but once that was done they cut out their shapes and added any details. Then they painted their lettering and the tombstone black. When things were dry (which took a while with the cloudy morning) they added a coat of dark grey and after that dried they added the light grey with a sponge roller. The final step was to age the tombstone with some watered down black paint with a brush and rag or a sponge. The morning session wrapped up by 2pm while the afternoon session arrived. We repeated the same process with the afternoon group of 11. The afternoon session was done and we cleaned up just after 7pm.
There were some great tombstones created during both sessions. Some great ideas for shapes and layout. Some good painting techniques too. Here are just of few examples of our wonderful students! 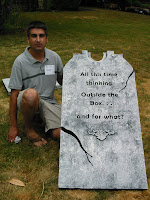 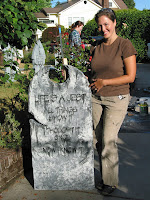 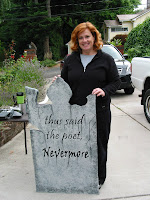 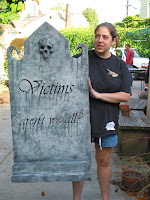 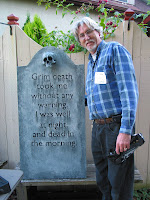 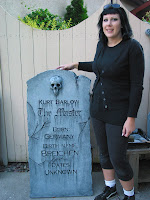 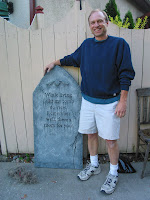 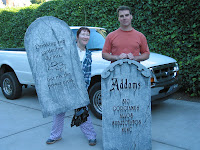