They call him "Mortimer" 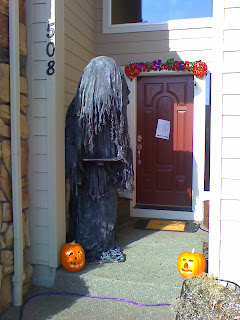 The mud man that we raffled off for Portland Center Stage was homeless for a bit before someone rescued him.

It started like this, some close friends of ours that just purchased a condo, but are fans of our stuff and the theater, purchased some raffle tickets "just to help us out" not expecting to win. We even joked about how funny it would be if they did win.

It was, actually, kinda funny when she came to me and said - they won. I thought she was kidding me at first. Ha, ha, very funny....oh, you did? "I don't want it" she says, "should I have them draw again?"

Before I can say, "sure" - someone pops out of her office and says why don't you have people bid on it and the highest bidder wins, that way you make more money for the theater. She is my cohort in fundraising for my work, so I was not surprised that she came up with that idea.

What I was surprised in is that she wanted it.....she made the highest offer. So he now has a home in suburban Vancouver.

We deliver it to her house and the family loves him, they named him "Mortimer" - the only complaint came from her 3 year old daughter who thought he would be softer when she tried to hug him. She tried to hug a mud man....I love this kid.