Our plan was to do some stuff around the house and go to the store and then pack the Pickup and leave by Noon. We didn't leave until 2pm and then we were stuck in I-5 traffic and didn't show up till almost 4pm. Poor Jen was starving and worried about where we were. The good thing was we were able to update her via cell from the road. 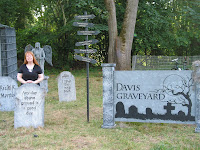 Once we got there we hurried to get the rest of the display setup. I wanted to get the LED lights working and we had a our big sign and directional sign to setup.

Vern pulled us aside in the afternoon and asked since weed pulling duty was canceled on Saturday if we would mind having people over to our area to see some of the work we planned on doing. Which meant we had to get to the park by 10am. 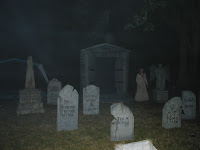 That night we had the ghost running in the Crypt and even had a guest dressed in a white brides outfit with blood all over her. We created a mood for the scares of the Geo-cachers. Larry even wore a Reacher outfit that cared the daylights out of a bunch of people. 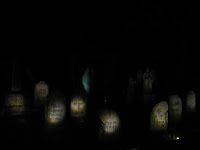 We went home about 11:30pm planning on getting up early Saturday so we could get back to demonstate stuff.
Posted by Jeff & Chris at 11:44 PM