After the Haunt DVD's were released we inquired into whether the Haunt X Awards were going to be held this year since the Haunt X convention in LAX was not. The creator of these awards said he was too busy with personal stuff to get them done but would love us to handle them for him and keep them going this year. So we worked with a few people to get a website setup and let people who bought the DVD's vote on who should win.

The voting took place for the entire month of March. We contacted the Ghost Ride Productions maker of the trophies and ordered the 8 trophies for the Best and Finalists in the 4 catagories (Yard, Indoor, Party, and Novice). We are still waiting to get the plaques made for them.

We have tallied the votes (which were less than expected). We have the winners but are waiting to announce them pending a few details. If you are wondering we were not one of the winners and even if we were we would have declined since we are running the awards this year. 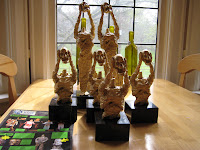