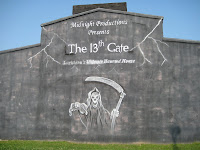 Got up at 7am and checked out of the Hotel and left our bags at the desk along with everyone else. Had a great buffet breakfast and then headed over to the 13th gate for a lights on walk through. They didn't allow us to take photographs because of all the new things they added this year. The walk through was just as fun as the lights off tour. Kathy Sanburn was our guide who is one of the owners. The amount of hours they spent doing the detail of this place was unbelievable. 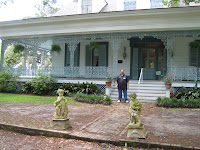 After the lights off tour we boarded our bus and drove to the haunted Myrtles Plantation. We had lunch at the Carriage house restaurant and then took the tour of the main house of the plantation. We had a charming (and very southern), humorous tour guide named Robbie. It is a tour we will never forget.

We then drove to New Orleans across the Lake Pontchartrain Causeway, the longest in the world - it is quite extraordinary to be out in the middle of the lake - you are on the road and cannot see land in any direction. 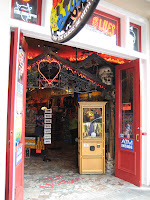 french quarter. The hotel had a lot of characters which helped make up for 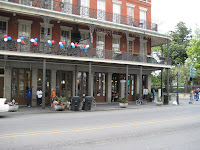 the lack of hotel standards (like air conditioning, which in the south we have learned is crucial, even in April.) We had some time after check in until the bus left so we did a bit of shopping and bought some daiquiris (drinking on the street in a much cooler location than Vegas!) Chris picked up some voodoo stuff at the Voodoo Blues store. (Of course, and she has named them all already, so if you feel a sudden headache.....:)

Our first haunt was Chamber of Horrors just outside of New Orleans. It was a small building with a very dedicated group of actors.
We then boarded the bus and drove to the The House of Shock. The name totally fits the haunt, no false advertising here. They had a preshow that consisted of people with hooks in their backs being dragged around with chains - that is the PG stuff - the R stuff is....well, not going on this blog (ask us in person, it is worth the story.) 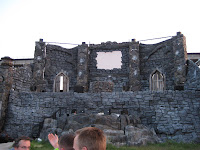 They have a pyrotechnic show before we went into the haunt (one of the owners is a pyrotech for concerts and there was a score of fire and police men at the event.) The haunt itself was satanic themed and not for the easily offended. They are careful to put VERY LARGE signs up that warn you that this is all in fun, if you think you might be offended - leave now! And they mean it. (If any of you are familiar with one of our favorite drinking bands the Poxy Boggards - it is similar to that - bring your sense of humor, but not your kids.)
It was a great show, creepy scenes with actors that touched you. (I believe Michelle had "blood" on her purse for the rest of the tour.) I was impressed by the consistant story line and their attention to detail. They had the creepiest actors. (including some children.)
We ate dinner there before the show started and hung around with the owners afterwards and talked to the people that worked there. They had a very large crew of dedicated a close knit people (you would have to be to pull this off!) We ran into a local fireman whose wife and son both volunteer - and he is going volunteer this year instead of working that shift. Quite impressive. 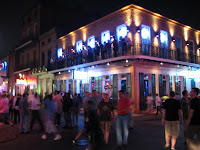 We boarded our bus and went back to Decatur street where we walked to Bourbon street and bought a drink and walked the street looking at all the clubs and listening to the music and watching all the drunk people (or was that just me looking in the mirror :)