New member of our family 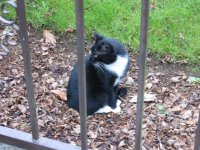 During the months leading up to Halloween when we are spending a lot of time outside on the weekends and building fires to stay warm at night we discovered we had a visitor. A small young black and white male cat was hanging around. After a few months I started leaving him dry food on the patio. He would gobble it down as if he hadn't eaten in days. He started to hang around more and more. Then just after thanksgiving he starting hanging outside our back door waiting to be petted or fed. He had named him Hal (short for Halloween Cat). Since I was home all the time I finally decided to let him in the house. He was in heaven. Food dishes, warm places to sleep. I took him to the vet and had him tested for anything that might get our older cat sick. He got his shots and something for flees and ear mites. I took him back later in the week to be fixed to mellow him out a bit and keep him from spraying on stuff in the house. Now he looks longingly out the window to the big outdoors he used to roam but has no desire to be out there again. We are enjoying having a young male cat in the house again after we lost our 18yr old Merlin to old age a couple of years ago. He likes to sleep in the bed and loves to play with cat toys for hours. Our older cat Madelyn isn't too keen on the new guy but she is slowing letting him grow on her. There is a little less growling and hissing in the house each day. Anyway welcome Hal to your new home. 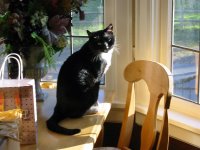 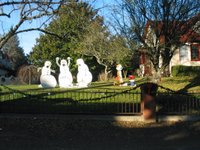 Our annual minimal yard display during the christmas holidays has been up since the weekend after thanksgiving. I have been meaning to post a few pictures of it. We often hear from our halloween visitors that "Yours is the Calvin & Hobbs house!". 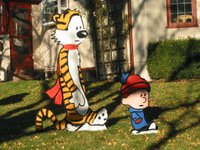 Our Windows are Installed 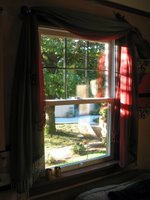 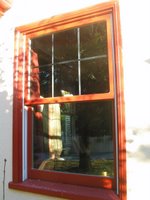 All of our double-Hung single pane leaded glass windows have been replaced with the latest wood window from Jeld-wen. http://www.jeld-wen.com/windows/wood/pozzi/product.cfm?product_id=21&groupid=

We painted the exterior of the windows before they were installed and now we have to paint the interior primered side when we get to it.
We can't believe how warmer and quieter the house is. It took a long time to get them installed but it is nice. Now we just have to replace the fixed windows.
Posted by Jeff & Chris at 9:36 AM 1 comment: