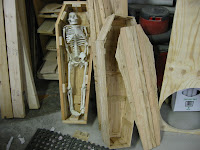 I built a couple of coffins for the smallest skeleton they call Mr. Thrifty. The first one was out of 1x3's but was too bulky and heavy. The second one I did today was out of lath slats. It looks a lot better and is very lightweight.
Not sure what they are for yet. Probably just decoration or maybe to sell? 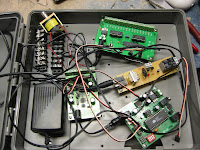 I bet you can't figure out what this mess is? It is all the components for a new effect we are doing this year. It is based on the programable controller from EFX-TEK. The other components include a sound module, 16 port extender, Audio Relay switch and a 12VDC solenoid.

Here is what will happen.
1. A bit of video will be displayed with an audio trigger towards the end of the video
2. The sound relay will trigger when the audio is heard on the video
3. The controller that is in a wait state for a trigger will start it's program which does the following:
a. Play a footstep sound 12 times
b. Play a footsetp sound and light a UV light (which will iluminated glowing footsteps)
c. Trigger a solenoid 10 times rapidly
4. The controller will go back to waiting for a trigger again.
5. The video will have a build in delay before it loops back again.
I just need to mount the components and create the permenent wiring. The program is already written and everything has been tested individually now I just need to hook it all up and make sure it works. 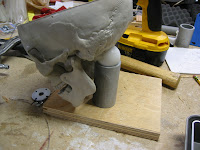 I have been working on doing an animated skull this year. I have experimented with several different ideas on how to do the mechanics but just can't settle on the right one yet. I do like the nylon ball I am using to pivit the head. It moves very smothly. 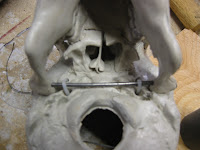 I like the way I did the hinged jaw it works really good.

I am still playing with how the head is going to be moved. I am toying with a cable system right now but it is too soon to tell if it will work. 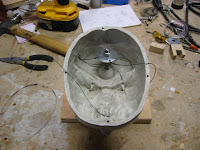 I am also working on a small mud guy lamp. Another decoration or something to sell? 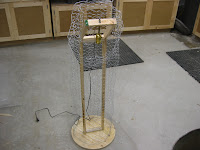 Getting ready for the Secret Garden Tour 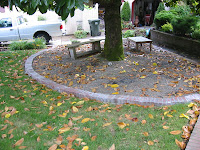 We spent the past few weekends getting ready for the Garden Tour on Saturday the 30th. They moved it back this year from mid May to June 30th. We thought that would give us plenty of time but we are still scrambling to get things done. 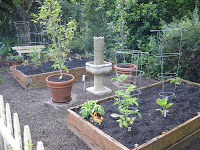 We did a brick and mortor edging around the mulberry tree to hold in the gravel we did last year. We took out that awful plastic edging.

We bought a new fountain for the vegetable garden area. Last weekend I dug up the beds and we brought a yard of compost in to cover the beds. 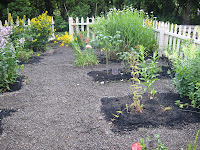 This weekend we got a 1/2 yard of pea gravel and redid the flower garden paths and the vegetable garden beds area.

Chris did a lot of weeding and planting and moving of stuff. 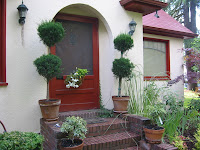 Of course we can't have an event if halloween isn't somehow present. Chris put some of the half concrete skulls in the gravel under the mulberry tree. 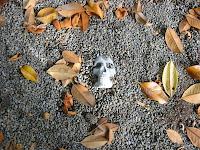 Things are moving slow in the halloween department. We have a lot of smaller projects this year and a few more technical ones.

I have been spending my time working on a new automated special effect using some prop controlers and other assorted electronics. It is going slow but I almost have it completed.

I have been doing a lot of research on how we are going to do the animated talking skeleton that will be sitting on our hearse this year. I think I finally decided on a method and there is a lot of support on the web with examples of how other people did it. Now I have to actually get started on it.

We have several new video projection projects. Some of them are just revamping the ones we did last year but we are also going to and 2 new ones. One of them is part of the automated special effect I metioned earlier. The other is going to replace the mechanical ghost in the shop window.

I am also going to be improving the grave digger just a bit this year and moving him to a new spot.

The Secret Garden Tour which we are in again this year was moved from mid May to June 30th. This has caused our halloween progress to slow while we prepare for this event. We are also attending Fright Fest Northwest this year and bringing a lot of our display. FFNW is July 13-15. We will also have to prepare for that too. So we really won't be in full swing with halloween until almost the end of July. This is a much smaller timeframe than we are used to but with the lack of big projects and the smaller ones we should be able to get everything done we are planning...
Posted by Jeff & Chris at 10:02 AM No comments: