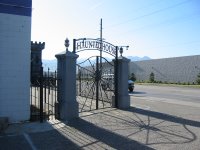 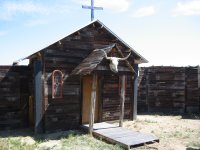 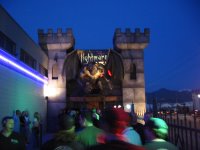 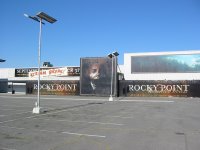 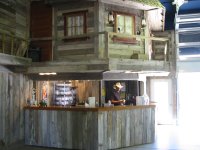 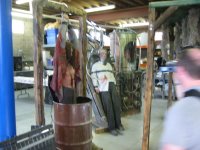 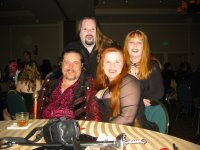 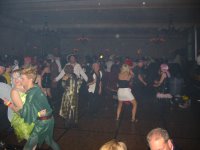 Here are a bunch of links

Vendors we bought from

OMG We are back from HAuNTcon!

There is so much to say and show you. We had a fantastic time and met a lot of really cool people. I will try to give you a run down of what we did over the last 6 days.

We flew out Tuesday afternoon and got into Denver around 5pm. While waiting for a shuttle to the hotel we met Steve Koontz the creator of Screamland at Oaks Park here in Portland. We talked about stuff all the way to the hotel and had dinner with Steve that night and drinks afterward. A great guy and he knew a lot of the people at the show that he introduced us to.

We got up early Wednesday morning to get on one of the 2 buses at 9am that took us to Anderson Farms in Denver that has a pretty big outdoor haunt. We had lunch there in their very cool barn and then went to the airport to fly to Salt Lake City. After checking into the hotel we went to Rocky Point the most anticipated haunted house all week. This is hands down the best haunted house in the country. The awards they get each year are well deserved. We had dinner there and then saw the show. We had to rush to get on the bus and go to the next haunt called Nightmare on 13th street which is one of the top haunted houses in the USA too. We were able to go through a lights out tour after we say the show.

After getting to bed late we got up on Thursday and headed back to Rocky Point for a lights on tour but sadly like the our first visit no cameras or video were allowed. They provided a sack lunch and we headed back to the airport. When we got back to Denver we headed to a Haunt called Murray's Massacre which is held in a HUGE metal roof barn on a farm. From there we went to LaFond FX studio which makes special effects props for movies and amusment parks. They also design several of the Wal-Mart Halloween props. We wandered around their 6000ft studio in wonder. This place was really cool. We then went back to the Hotel in Denver checked in and then quickly boarded a bus to tour Reinke Brothers Haunted Mansion and have dinner. Reinke is a year round halloween store that has some pretty cool stuff packed into every inch of the place. They have created a walk-through haunted house with actors that is pretty silly. We took the bus back pretty late and stoped at the bar in the hotel.

Friday was the offical beginning of the convention. We slept-in and ordered room service since the first seminar was at 11am. The seminars were devided into Actor, Business, Creative tracks and a Demo/Workshops. We mostly attended the Creative Track. We attended "Cool sounds for free" a overview of Audacity a free software program for editing sound files. In the afternoon we attened "Color Theory and Lighting" an advanced class about color in lighting taught by a very knowlegeable guy who hadn't done a seminar before but was still informative. Our last one of the day was "Effective Storlines" given by the creator of Dealdy Shoals Haunted Trail in North Carolina. It was mainly about their storylines they have done but was entertaining as well. We spent some time touring the show floor between seminars to get an idea on what we wanted to buy. We then had to catch a bus to Little Spider Scream Park for dinner and their outdoor haunted house which was very good. We came back to the hotel and stoped at the bar until late.

Saturday we attended the "Styrofoam Masonary II" Demo by Mike and Burt of Bad Boys Scenic Design at 9am. We then attend "Big Props on a Low Budget" by the creator of Woods of Terror in North Carolina. It was about getting props or materials from low cost or free resources. Mostly about how to get Boats, Cars, Buses, Trailers, Campers etc in a huge outdoor haunt. We spent quite a bit of time buying stuff on the show floor. We got some skeletons from Anitomical chart company, a couple of costumes from Hallows Eve Studios which Chris got a good deal on. We bought some LED spotlights from Burt from Bad Boys who created a company called minilights. We got some foam skulls from Bad Boys. Bought some hight quality fog juice from Froggy's Fog. We got a real old rusty lantern prop from Pale Night Productions. We bought a couple of smells from Sinister Smells. We then attened "Peppers Ghost" seminar which was pretty good overview of the effect with a good slide show and some models. The presentor was very experienced. We had dinner with Sam and Michelle and then ran off to our room to get ready for the Costume ball. It took us longer than we thought to get ready and we didn't get down to the ball until almost 9pm. As you can seen from the picture we went as vampires. I wore Gothica red contact lenses (thanks to Michelle for the extra solution). We both wore Scarecrow fang caps. We used Bloody Mary white facepaint and blood. The ball was a blast even though we didn't win any door prizes or drawings. Everyone who attened got a free set of photos like the one here. We drank and danced until 12:30am. The party moved to the mezanine of the hotel and we finally called it a night at 3am.

Sunday we didn't get moving until 10am. We attended the "Hands-on Webbing" workshop at 11am that was a bust because the presentor was on the show floor and asked the attendees to meet him there which was too crowed. The demo was mostly a sales demo of his web gun. We wandered the floor and bought some last minute things that were on sale from Shipwreck Productions. We checked out of our room at Noon. We attended our last seminar "Hauntbots 101" which was a Demo of a animtronic controler that is programed with software and a joystick. Was pretty cool. We said goodby to all our friends we met and then headed to the airport and flew home and got in about 8pm. We tried watching some DVD's we bought but we just too tired.

We had a great time and are both looking forward to using some of the ideas we have for our haunt this year and can't wait to attend the next one in 2007.
Posted by Jeff & Chris at 9:57 AM No comments:

Table for the utility sink 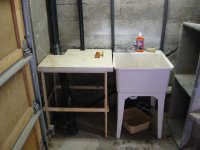 I helped my friend Jason tear down his patio cover and a metal shed on Saturday. He had a spare chunk of table top lying in his yard that I grabbed. I used it to make this simple little table next to the sink. It turned out pretty good.
Posted by Jeff & Chris at 4:34 PM No comments: 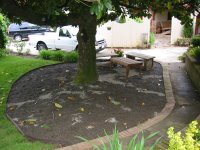 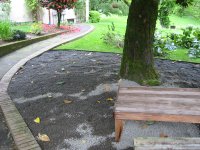 We could never get any grass to grow under the magnolia tree. So we decided to edge the lawn and put pea gravel down. I was going to put my bench around the tree but we put the benches and a table under it instead. I also trimmed a few of the low branches which really opened it up some. I laid landscape fabric down and hauled 2 half yard loads of pea gravel and spread it around. It looks like we are going to need another half hard of pea gravel to really fill it in good.
Posted by Jeff & Chris at 4:25 PM 2 comments:

I built a bench 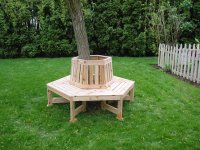 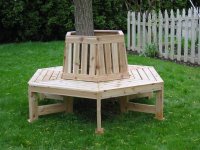 I had been wanting to build a bench that goes around a tree for the magnolia tree for a long time. This past week I picked out a plan out of one of my yard furniture books and bought the cedar to build it. It took me 3 days. The plan called for all the joints to be mortise and tennon. This took me a while to cut and assemble. I think it turned out nice though. The only problem was that it is too small for the magnolia tree. I decided to put it around our young willow tree instead. It still looks good.
Posted by Jeff & Chris at 4:19 PM No comments:

New Plants in the yard 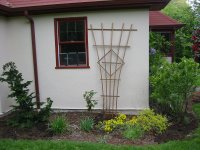 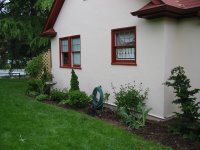 Chris bought some new plants. She had me dig up some existing ones and move them. I also planted all the new plants. She came up with some plant ideas for the back of the house now that we have removed the old rodies we had there before. 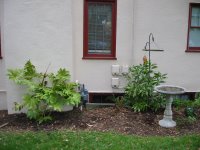 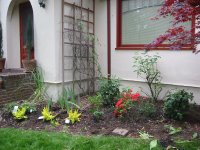 We also planted some new plants by the front window.

We dug up some overgrown plants in the flower garden and moved them.

It was a busy Sunday afternoon.
Posted by Jeff & Chris at 10:12 AM No comments: 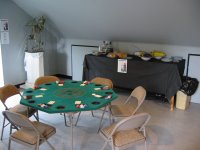 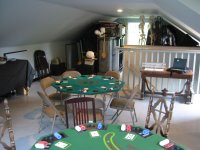 I held my first poker tournament in the newly remodeled upstairs. When we were doing this space and adding the bathroom I had always had the idea in the back of my mind that this might also work as a poker room space. It isn't it's main purpose but is a nice benefit?

We had 12 people play which made 2 tables of 6. There is enough room to squeeze in one more table but 2 tables is very comfortable. We can easily get 16 people with probably the max being 24. I hope to get a regular game going with at least 8 people until the weather gets to hot to play upstairs? 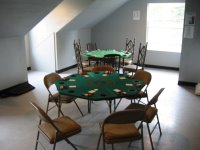