Our alarms go off and we fly out of bed rushing to get ready to leave so we could get there on time. We even went shopping at Safeway the night before so we were ready. It was like the scene out of Four Weddings and a Funeral (bugger, bugger, bugger). But we got there just a bit after 10am. I think Jen was amazed to see us. 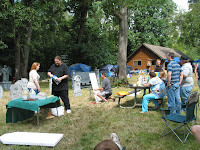 We poured some expanding foam and carved and painted some tombstones for a couple of hours. Grant from Canada joined in and did a tombstone for us. It was hot and we were constantly trying to find the shade. 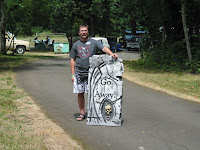 We found ourselves at the Pirate bar quite often. We talked to people all day and had a great time. 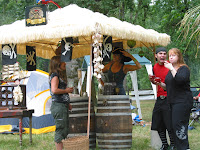 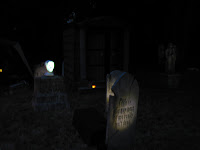 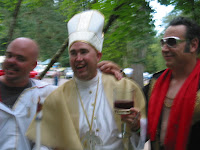 Of course there was the Costume ball. The Pope and Elvis came by to visit the Graveyard. We moved our video projection to the bust that we placed on the Mort and the Barons tombstone for the party.

We stayed up with the Pirates until about 12:30am but we finally had to get home so we could get up and rent the truck for the next day to load up and go home. Jen on the other hand stayed and was the life of the Party...or so we hear?