The yard is mostly working 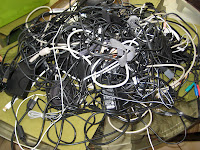 We had a few extra problems last night - first being the sound system that we got working by mid afternoon, did not work when we started it at dusk....no sound, nothing! Jeff got it working, but it still bothers us that it is having problems.
We heard from the crew that the replacement of the music soundtrack with just whispering is very creepy...:)
The "help me" directly ripped from the original fly is off working nicely....along with an occasional skittering sound, makes your skin crawl :)
Fog machine is giving us grief, we have two controllers and neither of them seems to be working.
The bush rattling effect is cool, in the daylight....at night you really cannot see anything and we are now thinking that it really needs to sync up with the glowing eyes in the bushes. I believe we will be ordering more EFX-TK controllers this Hauntcon :)
We will be working on replacing the way that some of the projectors and controllers are plugged in to be safer and easier to set up.
More testing the next few nights. Getting ready for our opening night, Friday, October 9th.
Thanks again to all our fabulous helpers!!!
Posted by Jeff & Chris at 1:23 PM

Ackkkkkkk, that picture of the tangled cords just gives me nightmares, LMAOOOO!