Got up early and grabbed the complementary breakfast. Sat down in the Bad Boys Scenic Design Foam Masonry IV seminar. As usual, it was packed. Went over the same stuff that seminar II & III did. (They were selling the same DVD as last year, but they say that a new one is on its way?) It is always a treat to listen to a crew that is so passionate about their work. Bert is one of the most creative guys we have met in the industry. They also were planning a full day seminar on Monday (cost $450 per person) so they said it would cover much more detail. Too bad we were leaving and didn't pay the extra bucks. I hear they are filming it and selling it for $75 - we will be looking for that!

The next seminar was the intermediate Prop-2 Programming seminar from EFX. As many of the other seminars before this one there were some technical difficulties getting started and then a mix up on what the class was about. It ended up being about basic programming than the advanced Prop-2 specific stuff. Which was good for the majority of the attendees but left Jeff a little disappointed. (Sometimes he is so high maintenance :)

Grabbed some lunch and ate with Dick Turhune a voice talent and PR service provider that we have met from CT and who might be able to help us with our talking skull.

I went to the silicone for makeup by Smooth-on (missed their molding and casting class since it was back to back with ours). Pretty cool stuff watching them making wounds and stuff with silicone right on the spot. Great speaker and great products.

We both sat in on the Airbrush makeup for haunts by Nick Wolfe. Which was fun and informative (including the impromptu philosophy lesson.) We watched him paint an already applied latex prostetic and then a full body paint job on a lovely (and brave) woman. All the men thanked him later for the frontal nudity experience. Nick is a great speaker and is fun to watch work and listen to.

I sat in on the Advanced Animatronics Keynote by Garner Holt who founded Garner Holt Productions It was a fascinating look into the most popular animatronic company in the world and its founder.

We stopped in on Mini Spotlight and placed our order for our lights this year. They have a few new products including a water-proof (important for the NW) strip of white LEDs. They are great people to work with and anyone looking to improve the lighting in their haunt or yard display should look into replacing their floods with low voltage LED lights. 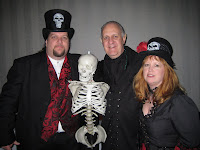 We had dinner and went up to our room to get ready for the costume ball (Chris got to wear her white trainers with the black dress, because one of the boots zipper when flying across the room!)

The costumes were fantastic this year and we had a great time. We tracked down Leonard for a picture (above). His vampire costume was quite appropriate since he went to Transylvania last year.

Chris won a picture from Ghoulish Gallery - they make amazing changing photos! I won the Napoleon's Last Ride portriat. They have a couple graveyard photos that I need to get. We left at about 12:30 when they shut down the bar. We changed out of our costume and went to the hotel bar and had drinks until they kicked us out with some other haunters. We made our way up to the Pickel suite which was FULL of people. We said hi to a few friends and then went to bed around 3am.