Got woke up by housekeeping so I made my way down to the first class which started at 10am and grabbed some more complementary breakfast (very helpful that they have that arranged!) I left Chris (who did not get up early - as we suspected) to catch some much needed rest. The first class was Scene Painting by Nick Collins of NC. He was a very talented scene painter and great speaker. I learned a lot just watching him.

Chris joined me for the next seminar. We attended All about Servos from EFX-TEK John Barrowman. As usual there were some delays with technical issues getting started. (not sure why these couldn't be addressed during the 30 min breaks?). I left the seminar a little disappointed I was expecting something with a bit more meat (funny comment from a vegetarian.)

He covered a lot of ground quickly and concisely. I could tell he pushed the skill level about as far as he could with the audience he had. Chris won a RC-4 by answering the question about which John/Jon was a opera singer (these two are always full of surprises!) correctly (John). (Drinking with fellow haunters/vendors pays off!! :)

Our last seminar was Greg Chrise, an experienced concrete technique contractor. He talked about the alternative to monster mud called Monster Crete. It was and odd format for a demonstration/seminar but he was informative, he talked about a lot of his experiences and explained the materials and how they are used.

We went back to the show floor for the last time and purchased another Midnight Syndicate CD (as a haunter you can never have too many of their CDs.)

We also talked to the Wolfe Brothers a bit at the Graftobian airbrush makeup booth to get some hints on what to buy.

John of EFX-TEK tracked us down and gave us a gift as a thank you for all our support of their products. Thanks guys, we cannot say enough good things about your products and your support of home haunters. See you in Provo!

Throughout the weekend we were constantly surprised when a local home haunter comes up to us and says "Wow, your stuff is amazing/cool!" Makes you feel all warm and fuzzy :) We love answering their questions and send them to the a vendor we trust and know will treat the yard haunter right. 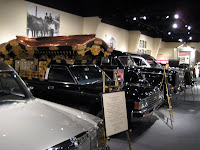 We had a light dinner and then went on a tour bus to National Museum of Funeral History. Turned out to be a FANTASTIC time. The museum had the largest collection of horse draw hearses I had ever seen. There were tons of unique caskets and other funeral history exhibits. We grabbed a bite to eat there and then headed back.

As usual we met another Oregonian. A couple who run a haunt in La Grand out of a 1920's hotel on its 3rd floor. They were a lot of fun to talk with and we look forward to getting together with them soon.

We went up to the Pickel Suite and said "hi" to some great new people. And then thanked Leonard and Jeanne for a wonderful time as always and headed to bead to get get up in 4hrs.
Posted by Jeff & Chris at 4:00 PM